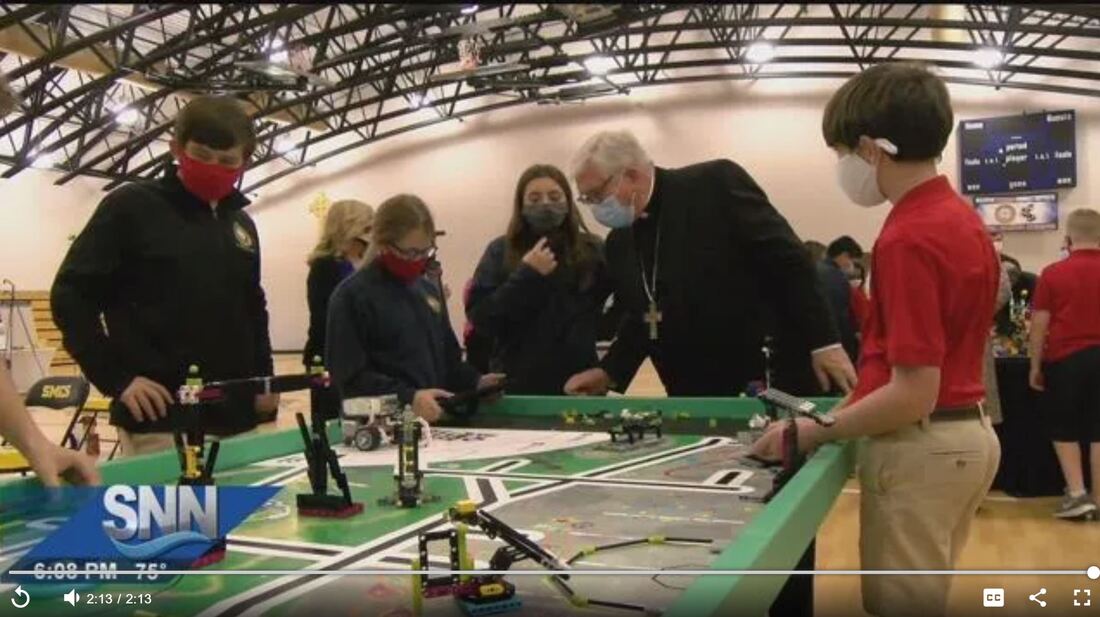 SARASOTA COUNTY (WSNN) - The Diocese of Venice’s Bishop is investing in the little leaders of tomorrow… and it involves Robots.

Bishop Frank Dewane invests in Robots for all 15 Catholic schools on the Suncoast. An effort to help improve STREAM education, which stands for Science, Technology, Religion, Engineering, Art and Math.

"I just think we’re in a world where everything is modernized," Bishop Dewane said. "If we don’t teach our students to work in teams, to be leaders in their respective disciplines, or where their intellectual gifts lead them, we have to be able to do that in every way.”

The investment was all made possible through a partnership with a Global Robotics Community called FIRST, ‘For Inspiration and Recognition of Science and Technology,' an effort to promote catholic virtues.

"Science and faith have gotten spared in our world today," Bishop Dewane said. "In every dimension of science, of technology, or whatever; it has moral implications. There has to be an underlying, ethical reason on why we act on something. And why we act in a proper way for the best of humanity.”

"I think if we work hard enough," St. Martha Catholic 6th-grade student, Emily Scarbrough said. "We can make faith and science work as a complete whole and have just an amazing thing to happen.”

These kits use LEGO products and increase in difficulty from the youngest to oldest. From 5th graders creating a heart monitor….

"We learned about teamwork and how STREAM can be fun and exciting," 5th grader, Lyrc Carey said.

"Using its computer language to put in the block coding to make it do all the missions," Scarbrough said.

And even if they hit a roadblock, they learn from it.

"And that’s just preparing us," Scarbrough said. "If we like this will be our hobby or our job to be engineers, then we could help people in the world who need to solve problems and help them with robotics and show them the technology that’s being used today.”

By middle and high school, students will be building competition robots.
​
Bishop Dwane says he hopes the students will combine morals and intelligence in science. 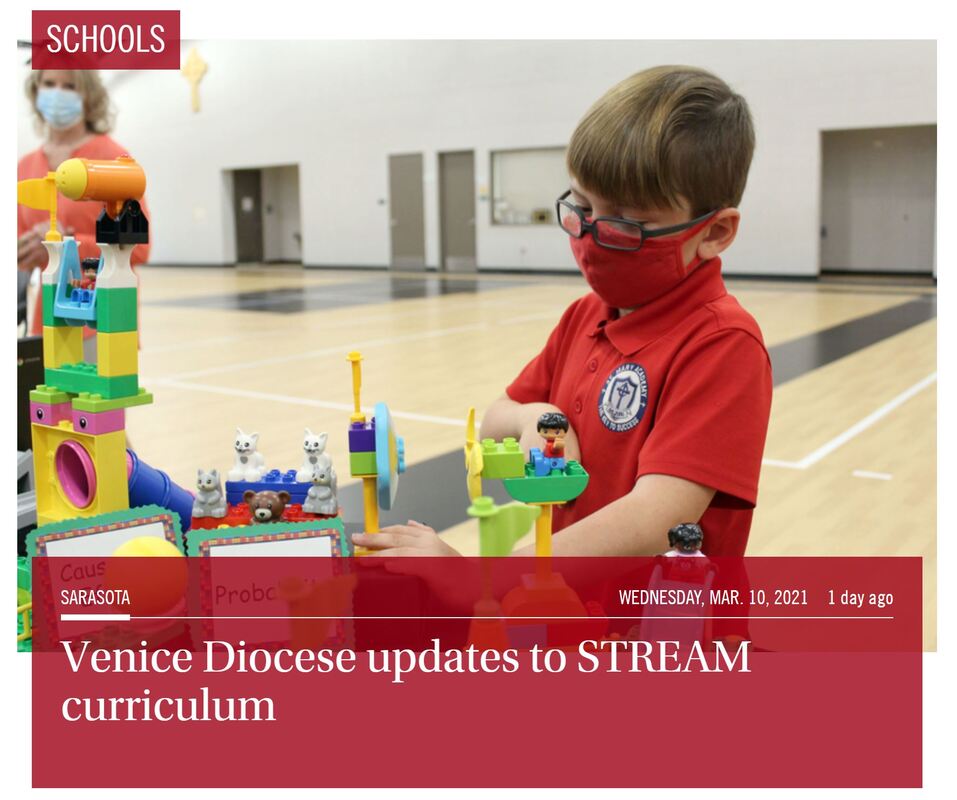 Catholic students throughout Sarasota County will follow a curriculum plan that focuses on science, technology, religion, engineering, arts and math.

Schools across the U.S. are no strangers to programs that increase focus on STEM education, and now, Catholic students across Sarasota County will see changes in their curriculum too.

The Diocese of Venice, which serves about 4,500 students across five Florida counties, including Sarasota County, is updating its curriculum to strengthen STREAM education.

STREAM is an extension of STEM education to include a focus on science, technology, religion, engineering, arts and math. The update is made possible through a partnership between the diocese and FIRST, a global robotics community.

The ultimate goal of the change is to place the diocese’s students ahead of the curve in primary fields of education while promoting core Catholic values.

“We want to create leaders,” Superintendent of Catholic Education Father John Belmonte said. “That’s what we do in our Catholic schools, we create leaders for civil society and the church, and in order for them to be leaders in the future of these areas, we have to educate them for excellence.”

“We try to teach to the whole person, so religion is an important piece for us because it captures our Catholic faith,” Belmonte said. “The science, technology, engineering, art and math is just like any subject but we’re going to be able to integrate our faith through these key concepts.”

Bishop of the Diocese in Venice, the Rev. Frank Dewane said the focus on the seven values through project-based learning will help students build soft skills to prepare them for success in the working world while building up their religion.

“This is a great opportunity to look at how students need to look toward goodness, fortitude, beauty and so on and how to put all that together to build up not just the intellectual side, but also the spiritual dimension at the same time,” Dewane said.

The new curriculum will be implemented at all age levels thanks to a commitment from the diocese. More than 500 robots, LEGO and curricular resources were provided by the diocese to make programming possible.

All schools will be given age-appropriate kits and robots to complete their curriculum and compete at various robotics competitions through FIRST programming.

Each kit increases the difficulty and expands on concepts learned in earlier years. By the time students reach middle and high school, they will be able to build competition-ready robots.

Although robotics is a major part of the program, it is a tool that allows the school system to expand upon the idea of project-based learning and cognitive thought process, diocesan curriculum specialist Jennifer Falestiny said.

School leaders hope the teamwork needed to build the robots and to compete can help students gain self-confidence and real-world skills for careers in the STREAM fields.

“I hope students are given an advantage, a good, solid education that prepares them for whatever future they choose,” Dewane said. “I hope it sparks in each one of them, the gifts they’ve been given by the Lord in terms of their intellect, their creativity, their visioning.”

The program is currently being run in five schools as a pilot program, and Dewane said the response has been positive, so the diocese decided to implement it at every educational level.

Dewane said leaders first discussed implementing it with first grade students and then adding a year each year as the students age, but eventually decided against that plan.

“If it’s going to make the contribution we believe it will, then it’s worth doing it across the board,” he said.
​
Falestiny said the schools will begin integrating the program for the final quarter of the 2020-21 academic year. Teachers will then receive additional training throughout the summer to be prepared for full implementation in the 2021-22 academic year. 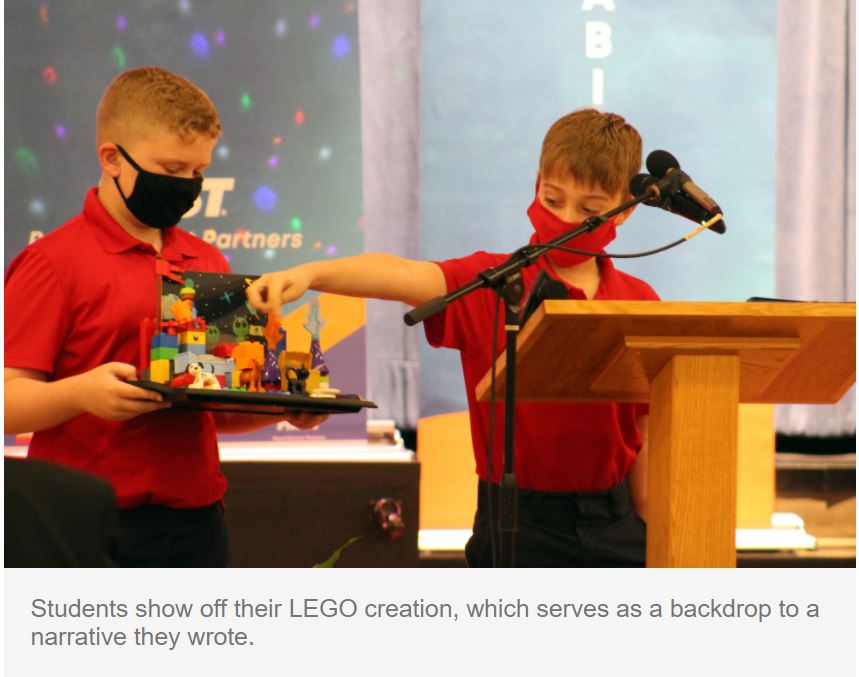 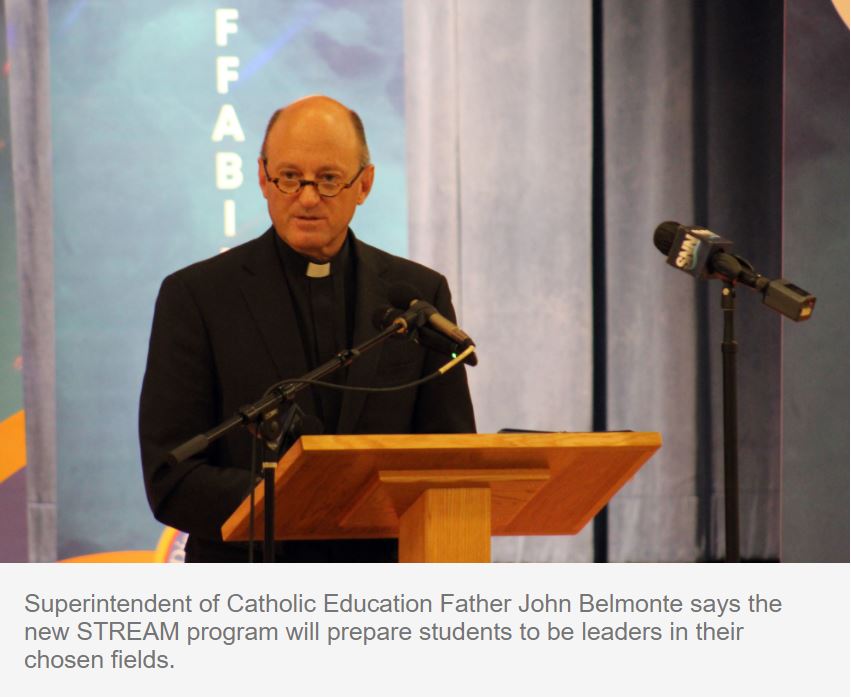 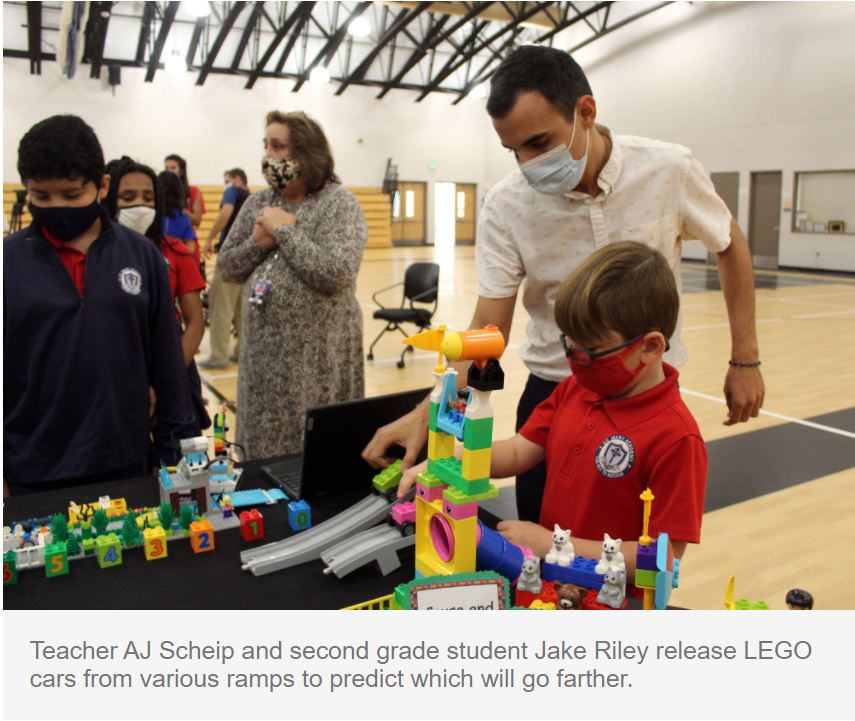 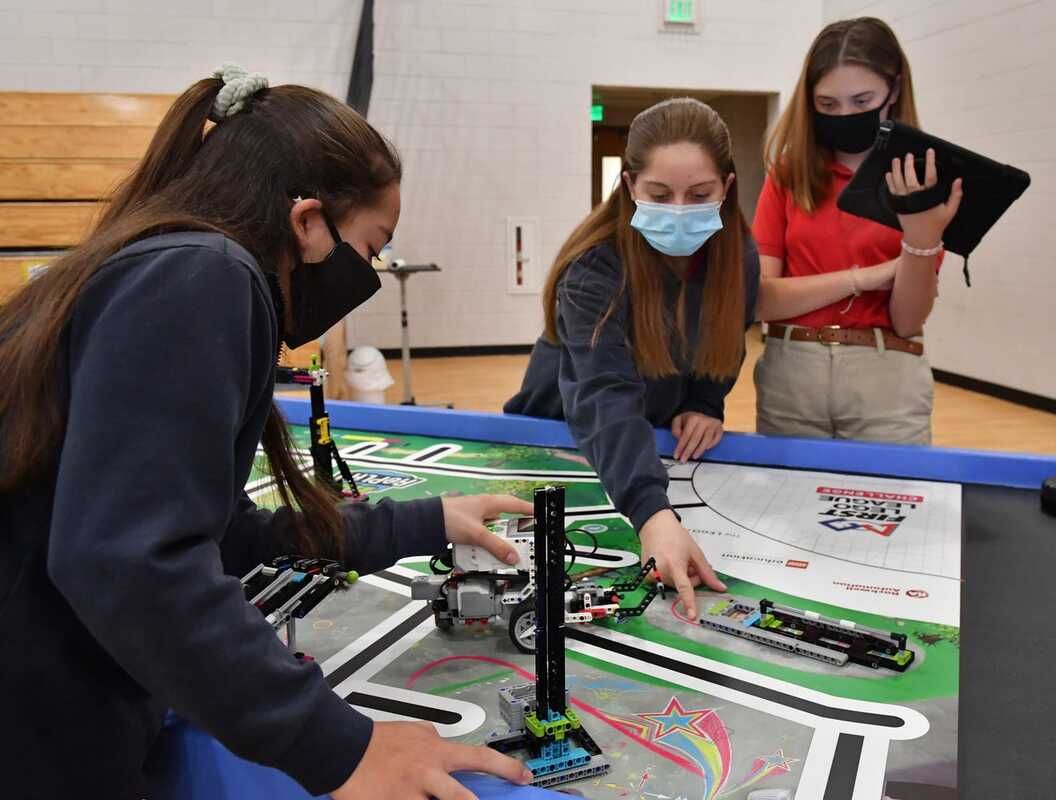 Seventh-grade students at St. Martha Catholic School, from left, Ana Martinez, Keira Smith and Ainsley Young, program a robot to follow a path and perform tasks Wednesday morning during a demonstration at the school.  Mike Lang, Sarasota Herald-Tribune.
SARASOTA – With a few taps of her finger on an iPad, St. Martha Catholic School sixth-grader Emily Scarbrough sent a robot on a series of preprogrammed tasks that included knocking down a bench and raising the height of a basketball hoop.

That was all part of a student demonstration on Wednesday as the Diocese of Venice unveiled a new partnership with FIRST, a global robotics community. The alliance is anticipated to enhance the level of Science, Technology, Religion, Engineering, Arts and Math education in the 15 Catholic Schools of the Diocese of Venice.

Emily, 12, and other students used block-based code to direct the robots to perform their tasks.

Drew Beall, an eighth-grader and part of the same team, stressed that the students were “not writing JavaScript or anything fancy; it’s all block-based.”

The block-based code, however, is perfect for the students to develop both experience and confidence as they learn. It is translated into traditional binary code – zeroes and ones.

“Once we put in the block-based code then once we play it, it will automatically send the binary code to do the tasks,” Emily said.

“It’s a lot more complicated than this,” Hope Smithers, 12, said as she pointed out the coding on the iPad Emily held.

At a neighboring demonstration table, Ana Martinez, 12, Ainsley Young, 13, and Keira Smith were able to overcome adversity, after their long string of block code was accidentally erased Tuesday.

“All this we did just five minutes ago,” Ainsley said, as their robot performed on mission.

FIRST is an acronym for “For Inspiration and Recognition of Science and Technology.”

Wednesday’s demonstration was the product of a pilot program.

The demonstration at the Zazarino Center at St. Martha also highlighted a gift of 500 robots and supplies to the diocese.

These kits use LEGO products: Duplo blocks for the youngest students, and more traditional blocks for older students.

By middle and high school students will be building their own competition robots, to participate in competitions hosted through FIRST.

“Our bishop really wants religion to be integrated in every subject, so we spent quite a bit of time developing how we can do that,” said Father John Belmonte, the Diocesan Superintendent of Catholic Education

The robotics courses are taught within a framework of the basic concepts of Catholic Intellectual History of virtues through the Gifts of Christ: Affability, Beauty, Fortitude, Goodness, Humility and Prudence, Belmonte noted.

“Those are supposed to inform their work together in groups. Robotics, as you may know, has to do with working in groups. Project-based learning,” he added.

In addition to that, he added, the STREAM program emphasizes Truth, Beauty and Goodness.

Rev. Frank J. Dewane, bishop of the Diocese of Venice, said he liked the way the robotics program will keep students engaged and prepare them for a competitive future.

“It has to do with who our students are today and who they have to become for tomorrow,” Dewane said. “I think we need to prepare them well not just in terms of future jobs but prepare them for university studies.

“Teachers always have a challenge: How do you keep the student interested and engaged?” he said. “And looking at this and reading about it and hearing about it, I think it’s one more way to keep students engaged in every aspect of that STREAM program.”

Greg Harrell, a Cardinal Mooney Catholic High School alumni and engineer who designs bridges, said, “You had me at robots.

“In a word, it’s very exciting," he said, adding that he believed faith and science could coexist.

“Understanding and truly believing that we don’t have to choose between science and God but that we have science because of God will give my kids, these kids, all the kids that benefit from this program a solid foundation for living a faithful life,” he said.

Bishop Hands Out Robots to Students 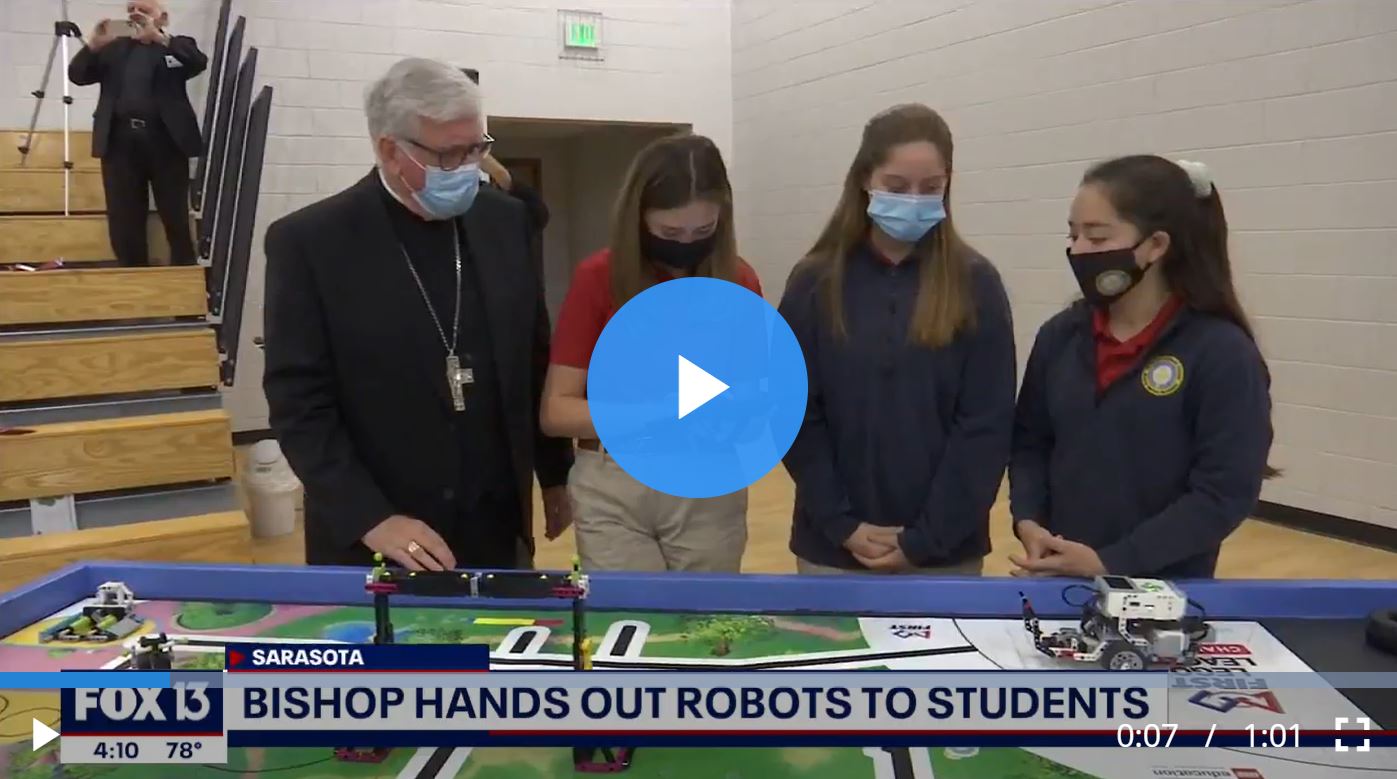 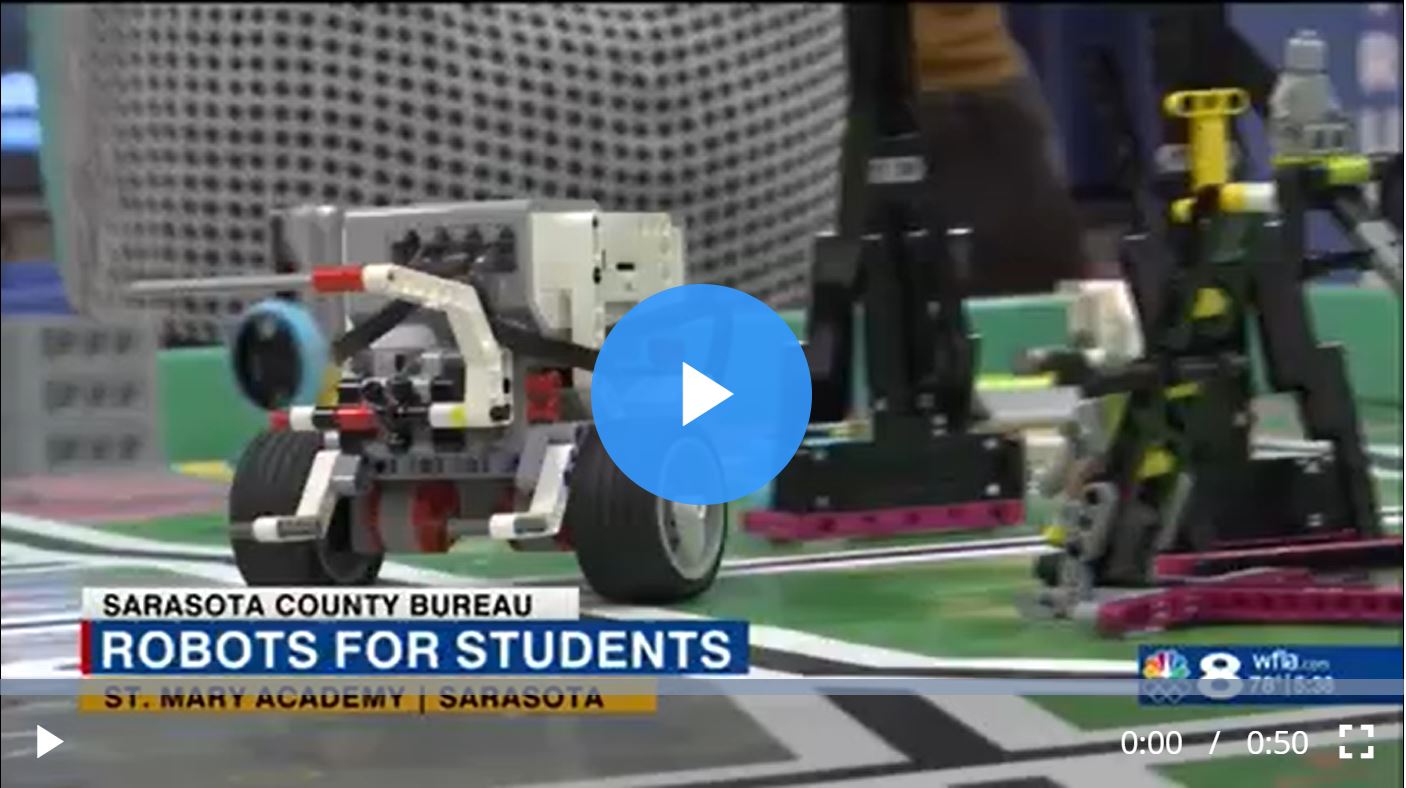 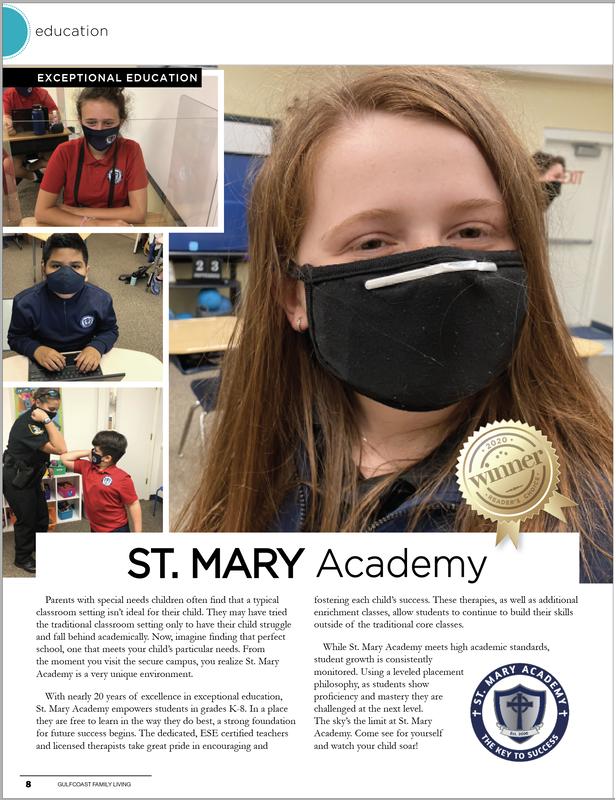 St. Mary Academy students get introduced to the Ukulele

The Knights of Columbus and the Young Musicians Education Foundation donated 46 ukuleles to St Mary Academy.
​
The students were each given an instrument along with their first lesson from members of the Gulf Coast Banjo Society.

​Sarasota students participate in the largest learning event in history

St. Mary Academic Gives Thanks ​with a Grateful Heart